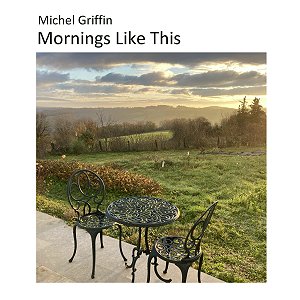 It all started when I made a rash promise to a concert audience to record an album of all happy songs, songs that celebrated life. Of the dozen songs on Mornings Like This, the ten that I wrote were mostly inspired by my beautiful wife Diane, in whose effervescence I daily bathe, and to whom the album is dedicated.

The original concept was to record simple acoustic arrangements for guitar, harmonica and bass, with my good friends Frenchie Dègre and Coco Correch. But then came COVID and - denied the opportunity of working with live musicians in the studio, and with plenty of time on my hands - I ended up making far more complex orchestral arrangements to many of the songs.

I am indebted to my friend and audio engineer Ian Maclean whose sharp ear and sage advice transformed the quality of the mixes and final masters, to Coco Correch, whose bass adorns Stay Free, recorded before the pandemic, to Alexis Van Eekhout, whose delightful pan-pipes came all the way from Belgium to add their ethereal imprint to Over the Moon, and to Frenchie Dègre, who contributed a spine-tingling harmonica part to Summertime from the caravan in his garden and sent it to me via the web, as the virus prevented us from recording together in the studio!

Mornings Like This - The album opens with a paean to tranquility and the empowerment of Love. It came to me almost fully formed, words and melody, one beautiful Spring morning in a house we were renting in a sleepy French village. It took five years - and a pandemic - for me to finally find the time to record it ...

Over the Moon - I wrote this song one wintry evening in Boston, a universe away from the Brazilian beaches its bossa rhythms evoke. Alexis Van Eekhout added the delightful pan-pipes, all the way from Belgium.

That Gold-Haired Girl - There are some people who are just such fun to be around, who make you feel ten feet tall. Diane is one of those people. So when I was fooling around in the studio one day, coaxing a kind of bluesy shuffle out of my guitar, these lyrics just came tumbling out ...

Gonna be There - This was one of the songs where the melody came first. The opening lines came quickly, but I kept reworking the central bridge, trying to express love without being maudlin. Hopefully, I succeeded. I had a lot of fun with the orchestration.

Early Spring (Come Back Home) - The first of four songs each named for a season, this was a tune that I found that I had recorded a couple of years before I started putting the album together and then forgotten all about. When I found it, it was just me singing the melody to a Spanish guitar - no words. But as soon as I listened to it again, I remembered the context - it was the early hours; I was alone in the house and Diane was 5000 miles away in Hollywood. So the lyrics tell that story.

Summertime - A very spare version of this timeless classic - just me, the guitar and Frenchie Dègre's plaintive harmonica (from the caravan at the end of his garden!)

Autumn Leaves - I have loved this song ever since hearing Eva Cassidy's sublime and untouchable interpretation of it. Mine combines the English and French versions, with a nod to the immortal Yves Montand.

Winter (Woodsmoke and Wine) - The last of the four 'season' songs has an Olde English Folk Song feel to it. Arranged for three guitars, double-bass and violin, with a cello joining in at the end. I've always loved wood fires. And wine.

Let the Moment Last - A tender song for Diane, who loves exploring the horizon, from someone who loves his roots.

Stay Free - I wrote this song soon after leaving university, so it's by far the oldest song on the album. Just me, two guitars and Coco Correch's sensitive double-bass.

You’re the One - Perhaps the quirkiest song on the album. I started singing it to myself as I was driving through the French countryside one day, and had to stop the car to get it down. Pop-song verses with a Cole Porter-esque chorus.

True Love - This is an a capella version of a song originally recorded for my Russian Dolls album. I used to sing with Les Bumets, an a capella jazz group, and I made this arrangement for them. Alas, the group broke up before they ever learnt it!