They walked along by the old canal
A little confused, I remember well
Stopped into a strange hotel with the neon burnin’ bright
He felt the heat of the night hit him like a freight train
Moving with a simple twist of fate

A saxophone someplace softly played
As she was moving on by the arcade
She heard the melody rise and fade, the sun was coming up,
She dropped a coin into the cup of a blind man at the gate
And forgot about a simple twist of fate

He woke up, she was gone
He didn’t see nothing but the dawn
Got outta bed and put his clothes back on
And pushed back the blinds
Found a note she’d left behind
To which he just could not relate
All about a simple twist of fate.

He hears the ticking of the clocks
Walks alone through the city blocks
Hunts her down by the waterfront docks
Where the sailors all roll in.
Maybe he’ll spot her once again. How long must he wait
One more time for a simple twist of fate.

People tell me it’s a crime
To feel too much for too long a time
She should have caught me in my prime,
She would have stayed with me.
Instead of going off to sea,
and leaving me to meditate
upon that simple twist of fate.

Bob Dylan was an early hero. I discovered him when I was 14 and just taking up the guitar. He has been with me ever since. I always felt a special kindred with his lovesongs, and was surprised to find that no-one appeared to have dedicated an entire album to them.

Recorded in the US and in France, this album was two years in the making.

A Simple Twist of Fate - One of the most atmospheric story-songs Dylan ever penned. The arrangement gains in intensity as the story unfolds. The lyrics are those Dylan used in most of his 690 odd concert performances of the song.

I Want You - I loved the first version of this on Blonde On Blonde. And then I heard the live version at Budokan, and was blown away by its intensity. So I slowed it right down, so you can hear the longing, and then added a swirling Hammond organ.

Make You Feel My Love ... - Arranged for three acoustic guitars, tenor-sax and not a piano in sight. Dylan’s most romantic ballad, delivered with all the tenderness at my command. Also features on my Atlantic Avenue album.

Where Are You Tonight? - A cri de coeur written when Dylan was travelling by train from the West Coast to the Arizona desert at a time when his marriage to Sara was beginning to fall apart. The arrangement starts soft and builds to an intense climax, with a duel between electric guitar and sax.

Girl From The North Country - One of the first truly autobiographical lovesongs Dylan wrote, about the girl he left behind in Minnesota when he went to New York. The treatment is simple, true to the original - just me and my finger-picking guitar.

Hazel - Is she late or is she never going to show up ? We all know that feeling. What I love about this song is how the melody is so upbeat and the words increasingly desperate. I had fun with the vocals.

Tomorrow is a Long Time - Dylan does longing very well. Many of the songs on this album are about not being in the right place at the right time. A simple arrangement again - just me and my guitar ...

Beyond the Horizon - You can almost feel the horse swaying beneath me as I pick my way through this delightful song. If the melody is familiar, it's because Dylan borrowed it from Red Sails in the Sunset.

To Ramona - One comes away from this song with a clear mental image of the girl Dylan must have first sung it for. A testament to his skill at lyrical evocation. The arrangement is simple: husky voice and the guitar fretted high.

If You See Her, Say Hello - Dylan returns to the theme he first explored with Girl From The North Country, asking a friend to look up an old lover. Only this time, she left him. And he never got over it. Devastating last line.

One Too Many Mornings ... - This is the very first Dylan song I absolutely fell in love with. I still play it in concerts and prefer this simpler fingerpicked treatment to the versions with The Band. This track is included from my Who Knows Where the Time Goes? album.

Love Minus Zero/No limit - Many think that the title presents two alternative names for the song. It's actually a mathematical formula. A tremendous portrait and homily to a clearly well-centered individual, arranged here for several guitars and a saxophone.

Don’t Think Twice, It’s Alright - This was the first song I ever sang in concert, at the tender age of 15. This live recording from the Cahors Folk Club in 2010, with Marcel Frenchie Dègre on the harmonica also features on my album of Ballads & Blues.

Corrina Corrina - According to his website, Bob Dylan has only played this ONCE in concert (in 1962!) It's still a good old traditional blues, though. Featuring Frenchie Dègre on the harmonica.

A growing number of music sites allow you to stream my songs in their entirety. If you are an Amazon Music subscriber, for example, you can ask Alexa to Stream Michel Griffin music. Spotify offers a service where you can stream my songs for free. Here are links to some of the streaming services where you can play Feel My Love: 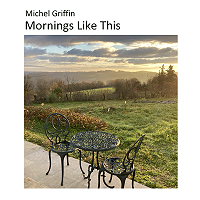