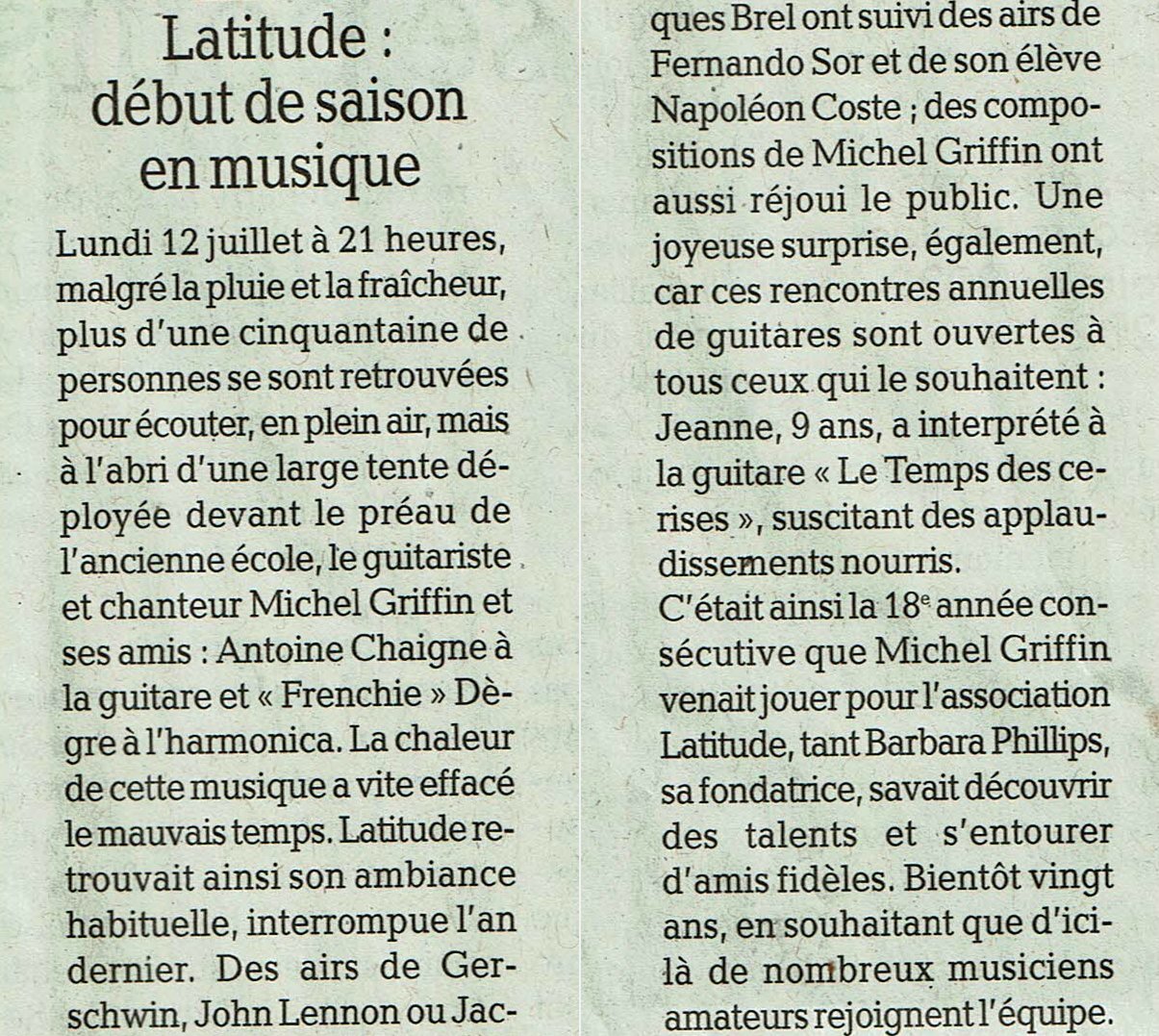 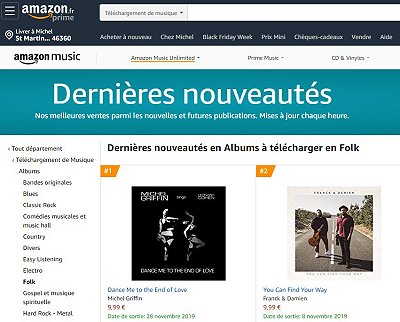 Durant le concert, restauration sur place au Velvet et Mets Saisons dès 19 h 30 (il est prudent de réserver). "- La Dépêche du Midi.
| Juillet 2017 | Critique fabuleuse du Big Takeover
"Born in Oxford, England, this well-traveled, tender-voiced troubadour’s early UK folk club/wine bar gigs and weekly BBC radio appearances led to him relocating to Paris, New York, and Switzerland. He finally settled down in Southwest France’s Lot Valley in 2000, where he co-founded the Cahors Folk Club in 2008 with fellow folk guitarist Mark Newman. (Located in a medieval castle in Labastide-Marnhac, Griffin regularly performs solo shows there, as well as duets with singers Anne-Em’ (Anne-Emmanuelle Marie) and Soledad (Sophie Celdran), and harmonica player Marcel ‘Frenchie’ Dègre.) Feel is his seventh album going back to 2004’s piano nocturne collection The Still Centre; on it, he expands upon the theme of his last three covers-speckled albums - 2008’s Who Knows Where the Time Goes?, and 2013’s Atlantic Avenue and live Ballads & Blues - by re-imagining 14 love songs from his ‘early hero’ Bob Dylan’s copious catalogue . Though his easygoing and elegant, English-accented croon doesn’t sound much like Dylan, he does resemble his other childhood hero Leonard Cohen (with hints of Nick Garrie and The Saints’ Ed Kuepper), especially on the stripped-down, ‘Suzanne’-like waltz ‘To Ramona,’ from 1964’s Another Side of Bob Dylan.

Still, Griffin manages to capture Dylan’s spirit and personality, and more generally the feeling of the 1960s folk music scene, through his elegiac, romantic delivery and dexterous acoustic guitar picking. On simply rendered, romantically craving ruminations like ‘Girl from the North Country’ (from 1963’s The Freewheelin’ Bob Dylan, later re-recorded with Johnny Cash for 1969’s Nashville Skyline), ‘Tomorrow is a Long Time’ (which Dylan first recorded live in 1963 at NYC’s still-going Town Hall, later released on 1971’s Greatest Hits Vol. II), and ‘One Too Many Mornings’ (from 1964’s The Times They Are A-Changin’; Griffin says it was the ‘first Dylan song I absolutely fell in love with’), you can almost imagine yourself sitting enraptured around the stage with your bohemian buddies in some smoke-filled 1960s Greenwich Village saloon. And on two 1975 Blood on the Tracks beauties, the bucolic ‘Simple Twist of Fate’ and lightly-brushed ‘If You See Her, Say Hello,’ and a slowed-down, serenading version of 1966 Blonde on Blonde’s ‘I Want You,’ his arrangements are delicate and dreamy, and his voice amorous and affecting. Even Dylan’s maudlin, gruffly-sung 1997 Time Out of Mind ballad ‘Make You Feel My Love’ sounds calming and candlelit under Griffin’s caressing touch.

As on ‘Make You Feel,’ Belgian Alexis Van Eekhout’s jazzy tenor sax adorns the stretched out, searching 1978 Street-Legal soliloquy ‘Where Are You Tonight? (Journey Through Dark Heat)’ (which also showcases the soulful backing vocals of Anne-Em’) and the punchier, playful 1965 Bringing It All Back Home paean (written as a portrait of Dylan’s future wife, Sara Lownds) ‘Love Minus Zero/No Limit.’ Meanwhile, the LP’s two final tunes, both from Freewheelin’. - a live rendition of ‘Don’t Think Twice, It’s Alright ’ (recorded in 2010 at the Cahors Folk Club in front of a coughing crowd) and Dylan’s adaptation of a traditional country blues song (first recorded in 1928 by Mississippi bluesman Bo Carter), ‘Corrina, Corrina’ - are enhanced by Dègre’s twangy harmonica. Whether you’re a die-hard Dylan devotee or a toe-dipping dabbler, you’ll cherish this chance to rediscover the legend’s sentimental side.

Download the album on iTunes or Amazon."- The Big Takeover. 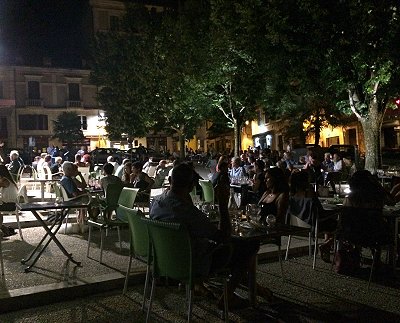 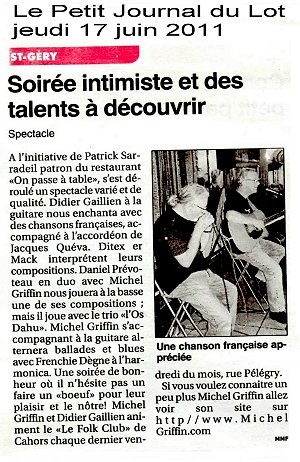 Patrick Saradeil, the new proprietor of the restaurant On Passe à Table in St. Géry, has already introduced a number of innovations. With the help of two local musicians, Michel Griffin, who runs the Cahors Folk Club, and Allison Marriot, he has now launched a series of Open Mic sessions at the restaurant, and is in the process of establishing a programme of Tapas Concerts for the Summer. The Open Mic sessions take place on the second Thursday of each month at the restaurant, which is in the centre of St. Géry, on the D662 between Cahors and Cajarc. Already recruited for the Tapas Concert series: the WoodsLot duo, who ran a Karaoke evening on June 4th, Booby Traps on June 25th, the Beans Blues Band on 2nd July, the Claire Aberlenc Trio, on 30th July, Michel Griffin & Frenchie Dègre on 6th August, and Rag Mama Rag on 27th August. On the menu will be Spanish specialities, tapas such as fried squid and Accras de Morue, and the musical fare promises to be quite as tasty as the food. Not to be missed !