August morning, gently breaking through its shadows,
Shreds of mist still clothing cliffs and distant meadows,
And I love you in the morning,
As a new day coaxes birdsong from the trees
And I love you, and the laughter in your eyes that's all for me.

August morning, dawning pink and gold and certain,
The first faint breath of Summer tugging at our curtains,
And I love you in the morning,
As the sunlight gently rouses you from sleep,
And I love you, and the laughter in your eyes that's all for me.

August morning, gently breaking through its shadows,
Shreds of mist still clothing cliffs and distant meadows
And I love you in the morning,
As the sun explores the softness of your cheek
And I love you, and the laughter in your eyes that's all for me. 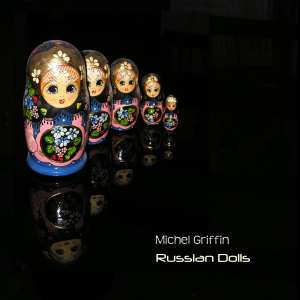 10 original songs, none of them about Russia - or dolls ! - but all of them revealing their hidden depths the more you listen to them.

The album was written and recorded up in my old studio in France, which occupied the upper floor of a converted old barn. The title song was written against the backdrop of the war in Iraq, but most of the rest of the album is about love and change ...

I am indebted to Maryline Dumont for her vocal harmonies, and to Jean-Paul Piquard for his eloquent bass and lead-guitar work on Strangers Once Again.

August Morning - Crystal-clear guitars herald the arrival of a new summer's day. The vocal is low and warm, and the smooth vocal harmonies are provided by Maryline Dumont.

Children of Circumstance - Edgy, atmospheric, electric. A lonely man contemplates a past he cannot change: One of the more poignant tracks on the album.

Where the Story Starts - This song was penned up on the hill behind my house in France, as the sun slipped over the horizon and the crickets began to still ... I was reflecting on my new-found roots.

Who Whips the Cream? - The song has an almost Samba rhythm, with its delicate Spanish guitar accompaniment. I wrote the song after the breakup of my first marriage.

Russian Dolls - A song about the hypocrisy of power: plangent electric guitar and more lovely vocal harmonies by Maryline Dumont.

That Laughter of Conchita’s - The portrait of a liberated spirit who left me with an indelible memory of her laughter and her easy ways.

The Poet’s Smile - A song about someone who was so concerned with his image that he lost his true self. The sparest track on the album, it came out in the studio in a single take.

Strangers Once Again - You go on vacation. You meet the love of your life. You return home. And arrange to meet up. But somehow, away from the beach and the rolling surf, the glinting, lilting moonlight, the magic's gone. And you realise that you've just become 'Strangers Once Again'. Fabulous guitar solo by Jean-Paul Piquard.

Walking the Web - When I was a kid, I always dreamed of having a third eye, with which to record the highlights of each day for subsequent playback. Now we all carry one in our pocket - it's called a cell-phone. And what's more, we can use it to walk the web as we move through our day.

True Love - A rhythmic paean to 'True Love', featuring the vocal talents of Maryline Dumont. 'True love's forever, or that's how it seems ...'

A growing number of music sites allow you to stream my songs in their entirety. If you are an Amazon Music subscriber, for example, you can ask Alexa to Stream Michel Griffin music. Spotify offers a service where you can stream my songs for free. Here are links to some of the streaming services where you can play Russian Dolls: